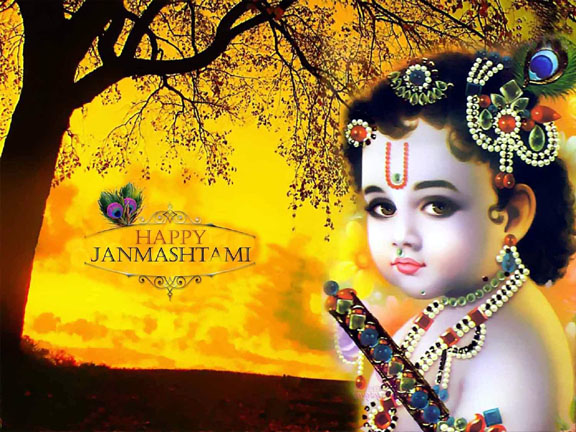 GOD is TRUTH; GOD is BEAUTY; GOD is JOY.
What an auspicious moment it would have been when the Lord himself was born on this Earth.

At the stroke of the MIDNIGHT, though The Lord was born in a tense situation in the prison, Nature conveyed a different expression, the atmosphere was very pleasant and peaceful. Cool breeze swaying in a melodious rhythm. Stars glittering and illuminating the dark sky, the flowers in full bloom, birds singing, peacocks unfurling the dancing feathers were expressing their joy in welcoming the LORD on this Earth to set righteousness.

SRI KRISHNA JAYANTHI is the Birth Day of LORD KRISHNA and is celebrated on the eighth day (ASHTAMI) of Krishna Paksha in the month of SHRAVAN (HINDU Calendar) which corresponds to the Engish months of Aug-Sep.

It is also known as GOKUL ASHTAMI, JANMASHTAMI and DAHI HAANDI

Sri KRISHNA is considered as one of the most glamorous incarnations of LORD VISHNU. Lord VISHNU, one of the HINDU TRINITY, took birth in this mortal world, when it is over-burdened with sinners, resorting to wicked actions. Lord VISHNU incarnated himself as Lord KRISHNA to liberate the people from the tyrannical rule of THE EVIL KING, KAMSA/ KANS. Lord KRISHNA is the son of King Vasudeva and Devaki.

The arrogant KING KAMSA was lord Krishna’s maternal uncle. Destiny had it that he would be slained by shri Krishna, His nephew(EIGHTH child of his sister Devaki).

Petrified by the predictions, KAMSA’s fear for his end kept growing larger by the day, he was transformed into a ruthless Ruler. In order to secure his own LIFE, it became important for him to eliminate KRISHNA. He imprisoned his Sister and Brother-in-Law, as he did not wish to kill his sister. In the confines of the Prison, DEVAKI gave birth to baby girls, repeatedly. The first 6 girls were killed by the evil king.

The seventh boy BALRAMA was moved in Rohini’s destiny. Before the eighth child was born was born, LORD VISHNU appeared in front of the couple and assured them that he will rescue them and Kans will not be able to harm the new born.

He gave them instructions to safely exchange the new born With Yashoda’s (his friend Nanda’s wife) new born baby girl.

The eighth divine baby was born and he was none other than the Lord Vishnu .He was KRISHNA, He was saved, when his father Vasudev immediately moved him away from the prison to Gokula, where his cowherd friend Nanda and his wife Yashoda lived. Yashoda had given birth to a baby girl.

Initially Vasudeva was ridden by insecurities as to how he will succeed in his mission. But as promised by Lord VISHNU, that Vasudeva will face no hardships in his mission of saving Little Krishna, and securing him with the cowherd couple.

The iron barred doors of the prison unlocked and opened and gave way to Vasudeva,He placed the divine child in a basket covered and bedecked with pretty flowers and headed towards Gokul as per Lord Vishnu’s instructions. He held the baby high over his head , while crossing river Yamuna. The river just moved away, making a path for Vasudeva to cross over. Rain fell in torrents,and a five headed serpent appeared behind and provided shelter to the baby. Vasudeva reached Gokul and exchanged Krishna with the baby and returned back to prison.

After learning about the birth of another female child, kans tried to kill the baby, but she skipped his hands and reached the sky and transformed into a goddess, she made him realize that Krishna has already taken birth and is safe and sound.

Meanwhile Gokul rejoiced the birth of the male child. Nanda was the chief cowherd and hence Krishna was brought up amongst the cowherd clan.

Lord Krishna was the lucky child who gained the affection of both his mothers, DEVAKI and foster mother,YASHODA.

Yashoda played an important role in upbringing little Krishna. KRISHNA was a very mischievous and naughty but adorable child and was everyone’s darling.Yashoda, just doted on him and spared no one when they approached her with complaints against her son. Little Krishna was very fond of butter and this led him to quietly tip toe to the neighbour hood. He stole all the butter along with his friends. They started scampering towards their home, when all the angry people chased them. The angry mob complained to the mother about her son Makhan chor. This infuriated Yashoda and when she decided to punish her little son, she was overpowered by her LOVE for him; she would end up cuddling and petting and forgot all about his mischievous errands. He was the most beloved prankster.

While Bala Krishna is busy with his pranks,accompanied by his friends, Kamsa had sworn to eliminate his enemy Krishna. He made many attempts by sending his aids in the form of Demons, to kill the child. But Krishna even as a child, foils every attempt of his uncle by crushing the Demons which approached the child Krishna, assuming various forms. Krishna was born to be a saviour, and he immediately could recognize the true form of the evil aids if Kans. Krishna mesmerized every soul with his enchanting flute and had everyone swaying to his tunes. As a child he lifted Mountain Govardhan on his little finger,to provide shelter to the entire village which was flooded by Lord INDRA and secured them from the rain that created havoc.

Thus there are various anecdotes explaining the Supreme power of the super hero. On JANMASHTAMI, the entire country wears a festive-look.

Small footprints are drawn from the entrance to the altar(PUJA ROOM) as it is believed that Balakrishna has entered the house to offer his blessings by eradicating evil.

Infant images of Krishna is placed in small cradles in the puja area. Butter and Poha are offered as Neivedyam. Devotees fast and Prayers and Bajans are organized around the Mid night of JANMASHTAMI / ASHTAMI OF KRISHNA PAKSHA IN THE SHRAVAN MONTH, to celebrate his Birth Day.

Evenings everyone throng in the streets to play DAHI HAANDI. A pot of Buttermilk is place at a height, all the youngsters form human pyramids to reach the HAANDI.

The topmost person breaks the HAANDI with a coconut among huge cheering and the money, fruits placed in the pot are hared among themselves.

Thus the birth of LORD KRISHNA is celebrated with great pomp and show. Homes with little kids, dress them as Balakrishna and Radha. This is a festival which unites lakhs of devotees together. RASLILA is performed where different stages of lord Krishna is played. Either at Home or Temple or a Bajan Mandal or a PARTICIPANT in a DAHI HAANDI group,or everywhere just get engrossed in the prayers and celebration OF KRISHNA JAYANTI,THE BIRTH OF LORD SRI KRISHNA AND SEEK HIS BLESSINGS.