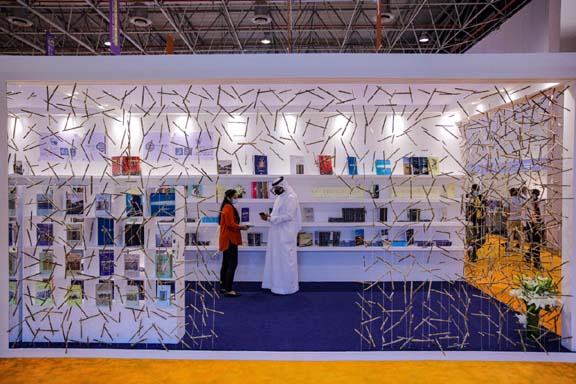 Forty two translated works in Arabic in the fields of humanities, social sciences, and the arts, which form part of the ‘Knowledge Transfer Project’ initiative undertaken by the Bahrain Authority for Culture & Antiquities occupy pride of place at its aesthetically designed stand at the 39th Sharjah International Book Fair currently being held at Expo Centre Sharjah.

With the aim of exchanging knowledge and expertise and engaging in inter-cultural dialogue on an international scale, the initiative ties in with the Authority’s mandate to explore, protect and promote Bahrain’s rich history and both tangible and intangible cultural wealth.

Some of the prominent translated works showcased by the Authority at SIBF 2020 include Digital Anthropology, edited by Heather A. Horst and Daniel Miller – an essential reading for students and scholars of anthropology, media studies, communication studies, cultural studies and sociology; Terry Eagleton’s The Meaning of Life which explores through philosophy and literature one of the most compelling of questions; and eminent social scientist Immanuel Wallerstein’s The End of the World As We Know It that documents the profound transformations our world is undergoing.

Other notable translated works include The Argumentative Indian by Nobel laureate Amartya Sen in which he discusses his country’s intellectual and political heritage; French philosopher Jacques Bouveresse’sDire et ne Rien Dire; and Ronald de Sousa’s Love: A Very Short Introductionthat delves into some of the many paradoxes raised by love.

“The ‘Knowledge Transfer Project’ not only highlights the cultural and intellectual openness of the Kingdom of Bahrain on both the Arab and international levels, it also encourages objective and rational thinking in intellectual matters and historical and social phenomena,and contributes to the advancement of the Arabic language and its terminology,” explained Bashar Jassim Al -Akhbari, Director of Bahrain International Book Fair.

The project aims for the translation of 50 books which are chosen based on the suggestions of an advisory committee made up of Arab and European advisors, he added.

Alsoon exhibit at SIBF 2020 is Modern and Contemporary Art in the Kingdom of Bahrain by Dr. MahaAzize Sultan which chronicles the nation’s artistic output over a period of 40 years.

Between the Two Seas is a stunning photographic account of modern Bahrain - which literally means ‘two seas’, and demonstrates how the natural elements have influenced the Kingdom’s growth, and how they continue to play an important role in daily life.