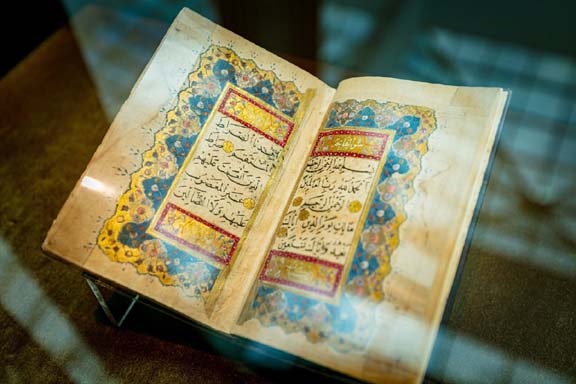 Among an extensive collection of centuries-old written materials and rare artefacts that are enabling visitors to the currently ongoing ‘Tales from the East’ exhibition in Sharjah to journey back in time, the stunning artistic calligraphy of the Holy Quran by the Islamic world’s most famous calligraherstake pride of place.

Organised by the Sharjah Book Authority (SBA) at its headquarters in Sharjah, the exhibition runs until May 3, and has copies of the Holy Quran displayed in a pavillion dedicated exclusively to the extensive personal collections ofHE Dr. Abdul Rahman bin Mohammad Al Owais, Minister of Health and Prevention.

It’s not only the abundant ornamental detailing in these manuscripts or the priod they represent that are noteworthy, but the fact that one of them – a rare Ottoman copy of the Holy Quran dating back to 1827 AD – found expression through the hands of a female calligrapher, Sherifa Zulaikha Khatami Al Saadi, daughter of Hajj Abdi Zadeh BasariYari.

The degree of detailing the artist cared about is evident in her incporporation of different materials and colours to create unique artistic patterns, which came together to constitute the Surahs or chapters, whose names were gilded in white ink on a golden background and decorated in green. The margins of the pages are adorned with golden Islamic designs accented with tithes and parties, while Tajweed, or the rules of recitation, are presented by the artist in red ink.

A copy of the Quran by Omar bin Ismail, one of the most renowned calligraphers in Islamic art history, is also on display at the exhibition. Written in the Naskh script in 1685, the manuscript begins with two decorated panels, followed by Surat Al An'am.

The exhibition also enables visitors to explore what historians describe as the Timurid period through the work ofcalligrapher Joanmurdbin Akhi Muhammad bin Bayazid Al Surouridating back to 15th century AD. The significance of thismanuscriptwritten in the Thuluth script is mainly drawn from the timeperiodof its creation, which is known to be the golden age in the development of Arabic calligraphy.

‘Tales from the East’ offers a golden opportunity to embark on an explorative journey of the different schools that contributed to the calligraphic interpretation of the Holy Quran – starting from Samarkand and expanding throughout the cities of the Ottoman empire before reaching Egypt and Syria during the Mamluk Dynasty. Among the exhibits is a chapterfrom a Quran manuscript dating back to the Mamluk period, written in the Thuluth script on dark paper and black ink.