Drawing a better future for the Arabian-Gulf Security 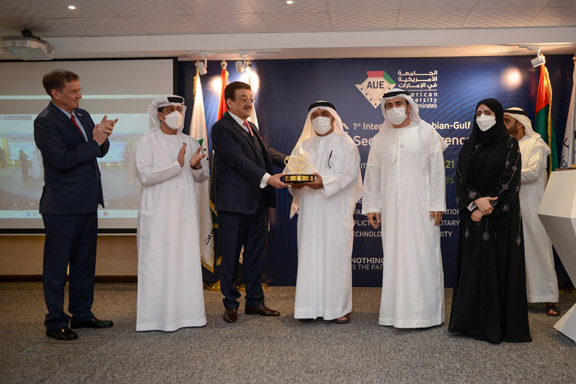 Dubai - The American University in the Emirates

The 1st International Arabian-Gulf Security Conference, was organized and hosted successfully by the American University in the Emirates (AUE) over two days Wednesday 10 and Thursday 11 November 2021. The Conference was held under the Patronage of and in the presence of His Excellency Lieutenant-General Dhahi Khalfan Tamim, Deputy Chairman of Dubai Police and General Security inDubai. The Conference was headed by the honorary Chair Major General Dr. Ahmed Nasser Al Raisi; chairedby Professor Muthanna Abdul Razzaq, President and CEO of the AUE. Participantshailed the conference's need, topics, timing and reasoning for such an organisation. The Conference brought together, academics, researcher, practitioners and expertsat the local and international levels to discuss the current status and future relations of Arabian Gulf Security. The conference was organized at an important moment in light of regional challenges yet also opportunities to convene and discuss the importance on peace and resolution of pending or ongoing conflicts. As a highlight to the Conference, His Excellency Lieutenant-General Dhahi Khalfan Tamim, Deputy Chairman of Dubai Police and General Security inDubai, stated that “the AUE's interest in organising an annual security conference and promoting the security culture in societyis one of the strategies that people should pay attention to because it is extremely important." "When a society's security is stable, individuals are able tolive better lives, which emphasises the need of instilling a security culture in society. We observe what has happened and continues to happen in nations where security and security culture are lacking," he added. Professor Muthanna Abdul Razzaq, President and CEO of the AUE, stated during the Conference that"the Arab Gulf, Arab countries, through which also the Gulf Cooperation Council constitute a particularly crucial region in all respects and circumstances, in addition to its worldwide and not just regional significance. From this standpoint, we took the initiative to hold this Conference in order to explore the region's security challenges from a variety of perspectives that will help up comprehend yet also propose issues for consideration." US Ambassador Mark Andrew Green CEO and President of the Woodrow Wilson Center from the Washington DC, lauded the AUE Conference, calling it “very crucial” for the region for both the UAE and the region particularly due toits importance in identifyingmethods and features for a brighter more stable and secure future in the Arabian-Gulf region. Elements achieved through the 1st International Arabian Gulf Security Conference.

The Conference is thankful to the collaborating partners of this years’ conference, to include The Hoplite Group, the Federal Authority for Identity and Citizenship, H.E. Sheikh Abdulaziz bin Duaij bin Khalifa al Khalifa Private Office, Expo 2020 Dubai, the InternationalAssociation for Intelligence Educators (IAFIE), the Center for Sea Power and Strategy At Plymough University UK, The Center for Global Security and Defence Affairs UAE & Egypt, The Center for Global and Strategic Studies Islamabad, the Georgian Center for Strategic Studies and Environmental Research.

During the conference more than 200 papers were submitted and 55 papers were successfully accepted to be presented with 75 authors/co-authors, which included, 4 tracks of presented papers to include security and law affairs, economic warfare and diplomacy and international affairs, peace and conflict resolution and military affairs and technology and cyber-security, onthe most recent developments and the future on the security, resilience and growth of the Arabian-Gulf region. Among others, topics like money laundering and financial crimes in the Middle East and North Africa, comprehension of international alliances in the Gulf and greater MENA region, recommended the way to implementing security convergence management and tackling threats were all covered and reviewed during the Conference sessions. The importance and role of water security and stadium security was included.Game-changing factors in cyber security were added to the historical development of fake news and its danger to societies, analysis of the phenomenon of conflicts and examining their causes and complexity, biological terrorism threats and ways to address them through strategic foresight were among the topics discussed as well while also methods of peace and conflict resolution. Moreover, sessions touched oncybercrime and technology, military technology issues such as the utility of dronesfor the Arabian-Gulf area, and the ramifications for future strategy and tactics. The attendees also considered Gulf security in terms of possibilities for stability and commercial continuity, as well as strategies to strengthen peace between the Arabian Gulf's two shores.

During the opening of our second day of our Conference a highlight included the talk of Major General Abdulla Al Hashmi, Member of the Board of Trustees of the AUE, who inaugurated the second day on UAE’s regional concerns and issues and security.Other topics centred on the complexity of theregionalsecurity challenges, factors against threats of asymmetrical threats and terror groups, the need for jointcollaboration in international governance and cooperation to face current and future challenges. The 1stInternational Arabian-Gulf Security Conference, already in its inaugural edition, is seen as a springboard for the second edition, which will take place next year in 2022. This Conference stems from the AUE's keenness to graduate competent and educated leaders andresearch experts, who make sound and important decisions for society and their nation.