Hussain AlJassmi celebrates the UAE 50th National Day with love, longing and pride for the country 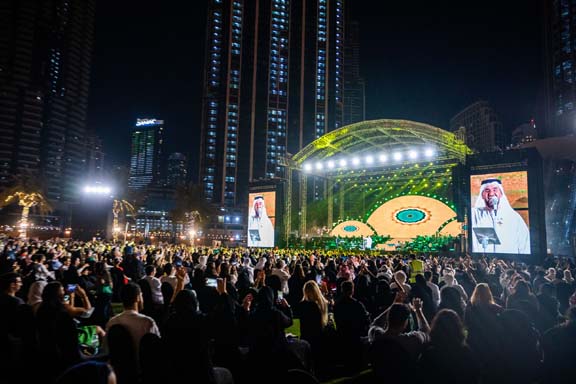 Between the Emirates of Dubai and Sharjah, the popular Emirati artist, Hussain Al Jassmi, “Ambassador Extraordinary and Plenipotentiary”, celebrated the 50th National Day of the United Arab Emirates, with the Emirati, Gulf and Arab audience participating in it between Burj Park in Dubai and Al Majaz Amphitheatre in Sharjah, presenting two large public concerts with the slogan "We sing for the homeland with love, longing and pride".

Al Jassmi started his concerts from the Emirate of Dubai on December 2, 2021, accompanied by his band led by Maestro Saeed Kamal, conveying the "congratulations" of His Highness Sheikh Mohammed bin Rashid Al Maktoum, Vice President, Prime Minister and Ruler of Dubai, may God protect him, to the state and its people on the 50th National Day through the poems of His Highness, which Al Jasmi presented with his own voice in front of the audience present in the Burj Park and viewers on the MBC 1 channel, which broadcasts the ceremony live. During the ceremony, Hussain Al Jassmiexpressed his happiness over the fifty years of excellence and success for his country, saying "Congratulations to our honorable leaders, our sheikhs and our people on the 50th National Day of the Union." Furthermore, he added that "Ambition will remain with 'Nothing is Impossible'...We all express hope, love, happiness and loyalty to this country and everyone who lives on its land." During the ceremony, Hussain Al Jassmisang a wide range of songs, spreading happiness and great joy to the various Arab and foreign nationalities present at the ceremony. By singing live, he presented for the first time his successful and distinguished song "Daq Al Qalb", which exceeded 23 million views on YouTube, where the audience interacted with him by singing the song. Then he concluded his concert with the song "Bel Bont elAreed", to mark the end of the concert in which Diana Haddad and Dalia Mubarak participated, organized by the Department of Tourism & Commerce Marketing (DTCM) in Dubai with Emaar Properties and in cooperation with MBC Media Group.

In the Emirate of Sharjah and on the stage of Al Majaz Amphitheatre in front of a full audience, Hussain Al Jassmipresented his other celebration on December 3, 2021, in which the audience shared with him singing, interaction and love for the homeland, moving between songs that carried messages of love, peace and love of the homeland. During which the audience asked the Emirati pop star Hussain Al Jassmi for singing multiple songs from his large and successful archive in the Gulf and in Arabic, concluding the ceremony with the song "Emirati", amid a large fireworks display that accompanied the singing of the national song that conveys feelings of love and pride for the country. Al Jassmi expressed his happiness to celebrate every year in his "bright" emirate (Sharjah) saying "First and foremost, we congratulate all their Highnesses the rulers and renew our loyalty and honor to them." "I congratulate our dear people and everyone who lives on this good land, and I wish them all the best.”he added.

Artists Almas, Faisal Al Jasim, Mohammed Al Menhalitook to the stage along with Al Jassmi in the concert that was organized by the Sharjah National Day Celebrations Committee. The proceeds of the ceremony were allocated to support the projects and activities of The Big Heart Foundation (TBHF).