Bodour Al Qasimi and Markus Dohle, CEO of Random House, call for greater cooperation and solidarity to lead publishing into the future 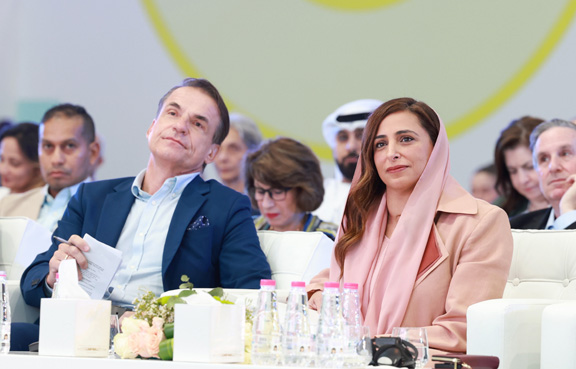 Sharjah, November 01, 2022 Bodour Al Qasimi, President of the International Publishers Association (IPA), and Markus Dohle, CEO of the largest trade book publisher - Random House, shared their expert visions of the future of the publishing industry at an exciting fireside chat on Day 3 of the 12th Sharjah International Book Fair (SIBF) Publishers Conference. Organised by Sharjah Book Authority, the annual conference at Expo Centre Sharjah brought together two of the best-known leadership figures in world publishing to engage in a wide-ranging conversation on key industry themes including the changing market landscape and managing thorough industry challenges such as digital transformation, freedom to publish, and representation and inclusion, amongst others.

In the presence of industry stakeholders and thought leaders, Bodour Al Qasimi, who has leveraged her exemplary vision and global partnerships during her IPA presidency to sustainably level up global publishing and empower its stakeholders, outlined the unprecedented success of IPA’s InSPIRE initiative in improving cooperation across the entire publishing spectrum in the post-pandemic era. Describing IPA’s efforts to bring gender equality in the world of publishing, Al Qasimi said: “When I became Vice President in 2019, the IPA - until then - had only one female President since its founding in 1896. I felt a sense of responsibility to open the door for other women in the industry to create equal opportunities and support growth and sustainability in the international publishing sector.” The IPA President who has led a number of diversity initiatives in the sector, revealed that PublisHer, a rapidly growing platform was part of an industry-led movement aimed at empowering female industry stakeholders and bridging the gender gaps in an industry predominantly led by women. During the conversation, Bodour Al Qasimi, a long-time champion of the region's publishing industry and who has spearheaded efforts to promote and develop its presence in the UAE and the wider Arab region, said she hoped to see the expansion of operations of Penguin Random House into one of the most promising of the emerging publishing regions.

‘Creating the future of books and reading begins in the home’

Expressing his confidence in the evolving Arab publishing market, Markus Dohle, CEO of Random House, asserted that his presence at the 12th SIBF Publishers Conference was “the starting point of establishing relationships and identifying opportunities with stakeholders in the region’s publishing industry. “We see the potential for a significant publishing operation here in the future,” he said. Al Qasimi opened the conversation with a discussion on the pandemic-induced challenges in the publishing industry. In response, Dohle described how global markets with a well-functioning e-commerce infrastructure could prove their resilience and agility during this period of volatility. He said: “E-commerce is a driver of efficiency and convenience and has levelled the playing field between large and small publishers but surprisingly, it is the strength of the physical format that has prevailed and stabilised the entire ecosystem for books.” Dohle added: “The US, for instance, witnessed a record 20 percent growth during the two years of the pandemic - a growth driven surprisingly by the physical format, while Brazil is a good example of how a strong e-commerce infrastructure that penetrates a large territory and complex distribution network can yield solid growth numbers.” Calling Random House “a format agnostic and sales channel agnostic company”, Dohle revealed that 80 percent of the company’s 700 million sales annually are led by physical formats and 20 percent by digital versions. “Reading creates empathy and builds human values and as publishers, we can make a very meaningful contribution to bring our societies together through books,” said the CEO of Random House as he urged publishers to take a positive view on storytelling in long form and display them everywhere - from homes and educational institutions to create the next generation of readers. “We want books to be discoverable, visible and widely displayed,” he said, adding that BookTok was a great way to create a buzz and expand marketing opportunities especially in the younger generation.

While acknowledging that the challenges of diversity and inclusion must be addressed for the industry’s sustainable progress and to discover and publish local voices, Dohle added that “free, open and equitable access to stories of all categories and subject matters is essential for societies to evolve, learn, and come together to heal in a polarised world.” Following the discussions at the 12th SIBF Publishers Conference, Bodour Al Qasimi led the CEO of Random House on a tour of the integrated facilities and services at the House of Wisdom, a futuristic social and cultural hub in Sharjah.